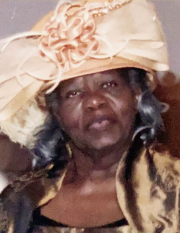 Carmelita was born on June 22, 1934, to her parents, James Johnson and Violet Anderson-Jones at Glover Hill District, Parish of St. Ann, Jamaica. At the age of fifteen, she migrated to Kingston where she resided with her aunt. While in her twenties she was baptized in the name of our Lord Jesus Christ by Bishop L. M. Allison at Bethel Born Again Church of Jesus Christ (Apostolic), and later received the gift of the Holy Spirit.

In 1976, Carmelita mourned the passing of her eldest daughter, Carol, who at the time lived in the United States.  While attending Carol’s funeral, Carmelita decided to stay to take care of her granddaughter, Simone.  Resiliency and hard work allowed her to work tirelessly as a Nanny for several New York City families. She would later transition to the healthcare industry so that she could care for her remaining children (Michael, Bridgette & Faith-Michele) and later have them join her in the states.

Lovingly called ‘Mama’ by her children and ‘G-ma’ by her grand, great-grand and great-great grandchildren, Mom would always be there to help raise God-fearing children. She also enjoyed sewing, Bible study, and crossword puzzles. Plus, her sweet potato pudding, Irish moss and carrot drinks were classic fan favorites.
A devout member at Oneness Rehoboth Apostolic Church (ORAC) she had a passion for winning souls for the Lord.  Our mom continued to walk with the Lord and as her family grew she consistently prayed for us and encouraged us to raise our family to serve the Lord.

Living alone in Mt. Vernon, NY for over twenty years and with declining health, Mom relocated to Charlotte, NC in 2018 to be with her daughter Bridgette and later Faith-Michele.
On the faithful summer morning of Monday, July 19, 2021, Mom took her final breath and transitioned into the arms of our Savior at the Novant Hospital in Huntersville, NC.
A life of wonderful memories will be remembered by her: three children,  thirteen grandchildren, fourteen great grandchildren, two great-great Grands, two adopted daughters, Daughter-in law (Doreen), two Sons-in-laws (Hollis and Rick),  one Brother, three Sisters, along with countless nieces, nephews, extended family and friends.

To order memorial trees or send flowers to the family in memory of Carmelita Johnson, please visit our flower store.
Send a Sympathy Card