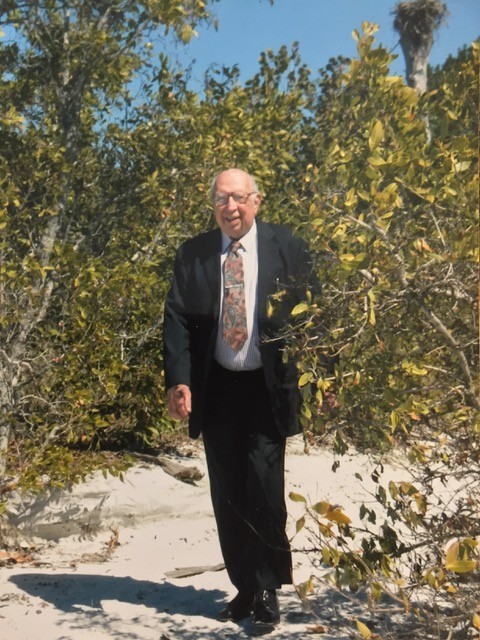 On April 1, 2019, Rev. G Robert Rowe went home to be with the Lord at the age of 99. Robert was preceded by Janet Rowe, his loving wife of 66 years. He is survived by his son Stephen (wife Mitzi) his daughter, Karen (husband Gary, recently deceased), his 4 grandchildren and 6 great-grandchildren. Services will be in Fort Myers, Florida at Olga Baptist Church on Saturday, April 27th at 2:00 p.m.

Robert was raised in Detroit and earned a degree from Detroit Bible College in 1948, graduating Cum Laude. After being ordained in 1948, he accepted his first pastorate at Conley Baptist Church of Highland Park. During a Foreign Mission Week at Highland Park, he and Janet were called by the Lord to the mission field. They first served in Porta Prince, Haiti in 1950. After returning to the states, he served as pastor of First Baptist Church of Deerfield Beach, Florida for fifteen and a half years. While in Deerfield Beach, he made two mission trips to Columbia, South America. Robert then served as pastor of First Baptist Church of Satellite Beach, Florida for seventeen and a half years. While in Satellite Beach, he made mission trips to Germany, Guatemala, the Bahamas, and twice to Korea.

In 1984 Robert retired but was very active as Interim Pastor for 6 additional churches, as a frequent supply speaker, and he participated in another mission trip to Nicaragua. His final service was as the seasonal Pastor of a church in the Holiday Condo Park, a large recreational vehicle park, for 12 years. He finally retired again at the ripe young age of 95 and joined his daughter Karen and her family in Charlotte, North Carolina where he lived until his final day.

Robert’s lifetime was defined by his faithful service to his Lord and Savior, Jesus Christ. While it’s challenging to include all the activities of a life so well served, it is nearly impossible to imagine the impact of a race so well run.

Sharing the dates and locations of Robert’s service pales in comparison to the thousands of lives he touched throughout his 99 years. From the sermons he shared with many churches, to the counsel he gave so many people during their best and worst days, to the souls he helped usher to the Lord, and the wisdom he shared with others who also received the call to serve . . . the impact of Robert’s life should be an inspiration to us all.

Those of us who knew him well are confident that Robert has finally heard the words he longed to hear, “Well done, my good and faithful servant”.

To order memorial trees or send flowers to the family in memory of G Robert Rowe, please visit our flower store.
Send a Sympathy Card