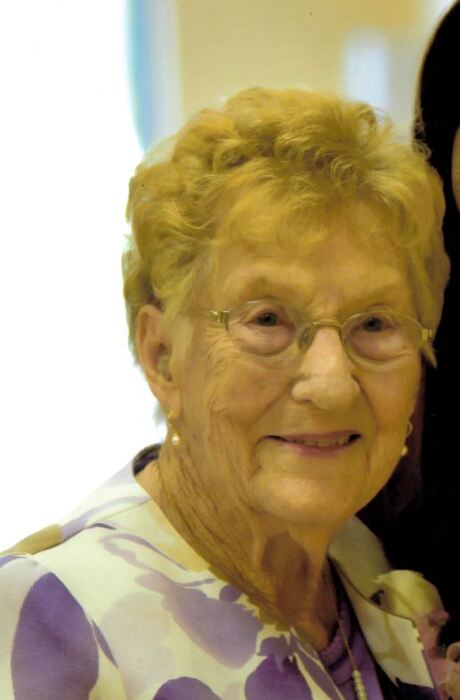 Along with her parents, Hazel is preceded in death by her husband, WC Miller; son, Eddie Miller; and eleven sisters and brothers.

She is survived by her daughters, Mary (Ed) Payne and Janet (Bob) Phillips; sister, Kate Metz; four grandchildren; five great grandchildren; as well as a host of nieces and nephews.

Hazel was a member of Westford UMC and Arrowsmith  Christian Church in Illinois. She was the first to volunteer for church fundraisers; often sewing, crocheting, and quilting beautiful items to be sold. Among sewing and quilting; Hazel also enjoyed cooking. Her recipes were famous to many across several states.

Known and loved as ‘Granny’, she was a selfless person. In times of war, she was the neighbor and friend that made sure everyone had something to eat. Hazel was a hardworking person. She took pride in being a farm wife and could drive everything on that farm.

Hazel believed you should be willing to try anything at least once. It was no surprise when she took up dart playing at the age of 90 while wintering with her daughter in Florida. At the age of 93, she won a dart championship.

In spirit of Hazel’s passion to feed others, memorial donations may be made to Westford UMC Food Pantry at 273 NC-49, Concord, NC 28025.

Burial will take place at Wiley Cemetery in Colfax, Illinois at a later date.

To order memorial trees or send flowers to the family in memory of Hazel B. Miller, please visit our flower store.
Send a Sympathy Card