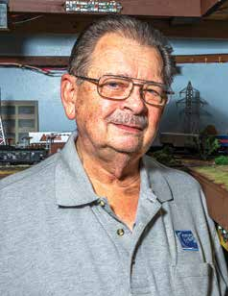 Jack was born on August 14, 1937 to the late Elbert A. Monette and Jeanne Pettigrew.

Along with his parents, Jack is preceded in death by his wife Judy Monette, his stepfather Luther Pettigrew and great grandson Axel.

Jack lived a full life dedicated to his faith, his family and model trains. He was quite literally a Jack of all trades. He served as a pastor, worked at several grocery stores in different capacities, worked as a draftsman and a machinist, installed aluminum siding, and drove a tractor trailer. All these jobs showed his resilience and drive to work and provide for his family. Jack was a great story teller and had a great sense of humor. He loved to read, listening to music, and garden in his early years.

Jack accepted Christ as his Savior at the age of 23 and went on to pastor two churches. He met his loving wife Judith on a blind date, proposed 3 three weeks later and were married 57 years prior to her death in September of 2020. From their union they were blessed with four children. Jack loved to serve. He was a Sunday school teacher at West Concord Baptist Church for 14 years. He also pastored Spencerville Friends Church and Mill Run Grace Brethren Church. He served as the Visitation Pastor at Harrisburg Presbyterian Church and also served as a Sunday School teacher at McGill Baptist Church. He and his loving wife Judy also volunteered at the JAARS ministry.

Jack served his country as a member of the Army National Guard. He joined at the age of 17. He achieved the rank of Staff Sergeant (E-6). As a Guard member, he also served a communications chief.

One of Jack’s most notable accomplishments was his earning his Master Model Railroader (MMR) designation in 2018. Becoming a MMR was not an easy feat. It takes years and many levels of certifications.

Jack was a wonderful husband, father, grandfather, and friend. He will be greatly missed.

In lieu of flowers, donations may be made to CVAN in Jack's honor. A Memorial Service will be held at West Concord Baptist Church on July 18, 2021 at 3pm.

To order memorial trees or send flowers to the family in memory of Jack Donald Monette, please visit our flower store.