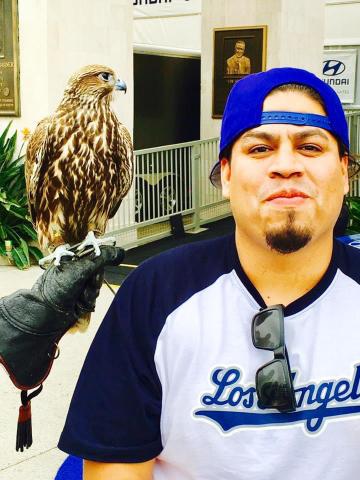 Julio was born June 19, 1984, at the Harbor UCLA Hospital in Torrance California. Over the course of the next 10 years, he lived in Wilmington as well as Long Beach California. In 1995, Julio moved to Puerto Rico with his Mother Jacqueline, and Father Julio Sr. Morado; as they were missionaries. Julio spent the next 7 years in Puerto Rico as a part of their church. He played the drums, acted in dramas, even babysat. During the ages of 18 – 24, Julio moved back to California, through that time he successfully completed Job Corps as well as the California Conservation Corps where he served as a Wildland Fire Fighter. After his time there, he continued to fight fires with the United States Forest Service from 2015 – 2017. During those years, he worked on the Groveland Hotshots, as well as, 2 years on a Type 3 Brush Engine. Throughout this time, he spent a lot of time with his family, visiting as much as possible. Week to week he’d find himself in the warm embrace of his loving family, so much so that they nicknamed him their “Gypsy Cousin.” In 2018, Julio decided to do something where he could spend more time with his family, and no longer spend summers fighting fires. He went to school for his commercial Class A driver’s license and successfully found his new career path. In 2019, Julio moved to North Carolina with his girlfriend, Ana and her Son Michael. Julio was dedicated to spending as much time as he could with Ana and Michael and loved them dearly. Julio and Michael had so much in common and loved going to parks and practicing Jujitsu together. Julio became a father figure to Michael, and the three of them were a family. That July, Ana, and Julio discovered they were pregnant and going to add another member to their beautiful family. Baby Koa was born on March 16, 2020. For the following months to come, the four of them shared many wonderful times together, from family trips to their first Halloween and Thanksgiving with the four of them.

Julio is survived by his girlfriend Ana, sons Michael and Koa, his parents and a host of extended family and friends. He will be greatly missed.

The family will hold funeral services Saturday January 2, 2020 at 1pm at 16901 Old Statesville Road, Huntersville, NC. If you have questions regarding this service, please call Harrisburg Funeral & Cremation at 704-781-5665. Funeral Services for Juilo in California will be held on January 5, 2020. Please see Coastal Funeral Center for those service details.

To order memorial trees or send flowers to the family in memory of Julio Junior Morado Palazuelos, please visit our flower store.
Send a Sympathy Card