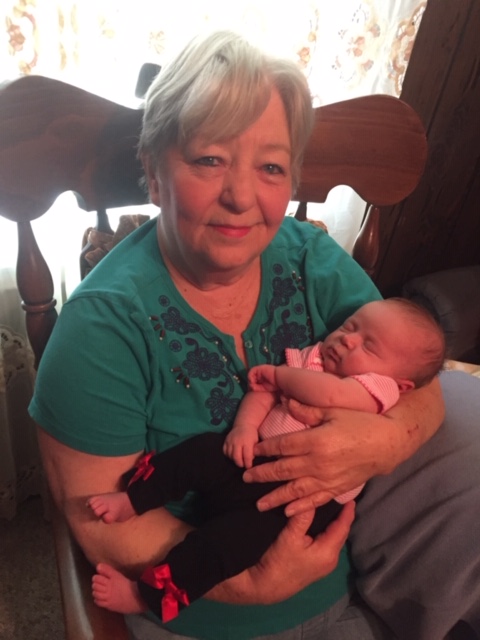 Karen Elizabeth Ruff Roberts was born in Gastonia, NC on May 7, 1943, to the late Ruth Mayree Harstin Ruff, and the late Steedly Roosevelt Ruff. She relinquished her physical body and moved on to heaven (after complications from a heart attack) on Thursday, Sept 12, 2019. “We are spiritual beings, having a physical experience,” was one of her favorite mottos…..

At the age of 9, while playing “Jack rocks” on the front steps of Oak Hill Elementary School, in Lenoir, NC, Karen met Timothy Edgar Roberts. On October 24th, they would have celebrated their 57th wedding anniversary.  Some high school “highlights” include Karen being know as “The Pontiac Kid,” due to her fast driving skills in her daddy’s 1960 Bonneville Pontiac.  She married Tim in 1962, and was stationed in Germany with Tim (Army Airborne).

In 1964, Karen gave birth to a daughter, April Elizabeth; their only child.  (Dan Demers, of Weld, Maine, became their “Son” when he married April, in 2006).  Karen held numerous jobs, but she truly loved being a “Key punch operator” at Interstate Securities, in uptown Charlotte.

In 1988, Karen and Tim became proud grandparents, when Aaren Elizabeth Boggs was born to April and William Boggs.  In the late 1980’s, Karen, Ruth, April, Linda and Aaren were introduced to “Clogging” by Karen’s late sister in law, Joyce Ruff.  Karen fell in love…and clogging became, literally, a “Family affair.”  Karen danced with the Kindred Spirit Cloggers until 1997.

In 2017, Karen and Tim gleefully became Great Grandparents, when Evalyn Elizabeth Upton was born to Aaren and Drew Upton.

Karen was known for her beautiful cursive and calligraphy writing, piano playing, Shalimar perfume and putting “Hearts” on everything!  She loved shopping at Goodwill and yard sales, yellow cake with chocolate frosting, Dr. Phil,  “The Rock” Dwayne Johnson, Mary Engelbriet, Mary Higgins Clark, the book “Jesus Calling,” Kaleidoscopes, and playing Canasta!  Karen loved animals, and asked that a portion of her ashes be scattered where her beloved pets are buried.

As for arrangements:  Karen’s wishes were to be cremated, and that there be no “Funeral;” but instead, a “Celebration of Life.”  This request was very fitting, because she loved gatherings…and hosted many of them throughout her life.

So, on Saturday, Nov. 2, from 4:00 – 8:00 PM, there will be a CELEBRATION OF LIFE for Karen at Asbury United Methodist Church.  We will meet in the fellowship hall, at 11724 Asbury Chapel Road, Huntersville, NC 28078.  Please dress casual, and bring a covered dish, snack or dessert.  Our family has held many happy gatherings there…so bring your happy memories of Karen…and if you are comfortable, share them with us.  We’ll have a microphone/karaoke machine set up….for anyone who would like to speak or sing, in Karen’s memory. An RSVP (by Sat, Oct 26) via text or voice mail to April at 704-875-6006 or TheLadygunsmith@gmail.com would help with setting up the fellowship hall.

In lieu of flowers, we have set up a College Fund/Go Fund Me page for Karen’s two year old Great Granddaughter, Evalyn Upton.  Karen, aka “GG,” simply adored her with every fiber of her being, so we feel sure she would have wanted this. GoFundMe: “In memory of Karen Roberts – Evalyn Upton’s “GG.” Paypal = TheLadyGunsmith@gmail.com , or snail mail:

We would like to express our gratitude to the Novant Presbyterian Cardiac Intensive Care Unit, on Hawthorne St, in Charlotte, and the paramedics and firefighters that cared for her and transported her.  Their level of care and compassion could not have been better!

A special “Thank you” to ALL of you who have prayed for us, and shown your support, during this very difficult time.  We love and appreciate every single one of you, and every single act of kindness!  Thank you, from the bottom of our hearts!

To order memorial trees or send flowers to the family in memory of Karen Elizabeth Roberts, please visit our flower store.
Send a Sympathy Card