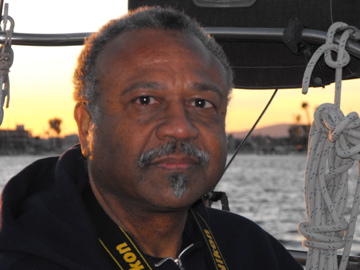 By profession Keith was a graphic designer and an artist. His love of art no doubt expressed itself in his striving for excellence, which he knew is achieved by refusing to succumb to failure. He was deeply interested in self-culture. As a youth he pursued things that developed one mentally and physically. Early explorations of weightlifting and competitive swimming gave way to yoga, which promised more holistic development. This eventually led him to become a practitioner of Transcendental Meditation on one hand, and Kung Fu and Tai Chi on the other. Keith was a member of the Sierra Club when he lived in California. His love of hiking developed in Barbados, however, where he joined organized hikes that acquainted citizens with the geography of the island. He was never without his camera to capture the beauty of landscape where ever he walked. His family knew him as a loving relative; as a son, father, brother, cousin, uncle, in law. His friends knew him as loyal and dependable. Keith was a loving father to Issa, his son. Keith will be deeply missed.

To order memorial trees or send flowers to the family in memory of Keith Carlton Gall, Jr., please visit our flower store.
Send a Sympathy Card