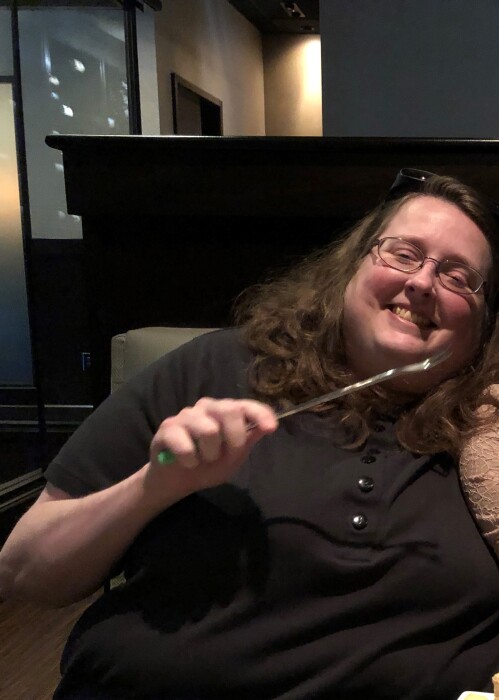 Melinda was born in Alexandria, VA on November 15, 1973 to Russell Williams and Linda Kangas.

She is preceded in death by her mother Linda Kangas.

Melinda’s health issues began in earnest shortly after her daughter, Anna, was born in 2001, but she had hints of them even in her childhood.  Over the course of the past 19 years, her immune system had more and more problems. She struggled with Rheumatoid Arthritis, Intracranial Hypertension, Fibromyalgia, and Guillain Barre syndrome among others.  In the past six years she had two brain-related surgeries, and she never fully recovered to her prior health after each one. Since 2015, she had been mostly bedridden, and she hadn’t known a pain free day in over 18 years. The pain she dealt with was the intense kind that effects every joint in her body, and all of the nerve endings in her extremities.  The medications prescribed were never enough to kill the pain, but she would never ask the doctor to increase her dosage, even as her pain worsened over the years, due to concern about becoming addicted. So, she just lived with the pain.

Despite all of this, Melinda was the sweetest, kindest, most loving person one could ever be blessed to meet. She refused to allow her conditions to impact how she treated others. She wanted so badly to meet her grandchildren one day. She was an amazing wife and an awesome mom.

Over the past few years Melinda has said she doesn’t understand why God still has her here. Why did she survive her other surgeries just to become more debilitated and pain ridden?  She accepted that He had a purpose, but she was ready to be free from her pain.  Her love for her Heavenly Father never wavered. We’ve learned a lot from that.

January 30th, 2021, was the first time in nearly 19 years that Melinda has been without pain. We know that, for her, this transition was a joyous one. And, we know for certain that she is rejoicing in the presence of her first love today. However, we miss her greatly here on Earth.  Heaven has gained a wonderful wife and an exceptional mother.

Above all, Melinda would want anyone reading this to know that Jesus is greater than any earthly pain or discomfort.  We don’t always understand His ways, but we trust them.  He longs to have a relationship with you.  If you don’t know Him, now is the time to ask Him into your heart.

Memorial Donations can be made to Voice of the Martyrs (https://www.persecution.com).

To order memorial trees or send flowers to the family in memory of Melinda Williams Bowie, please visit our flower store.
Send a Sympathy Card