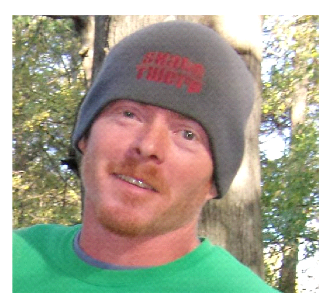 Brad was born on May 7, 1982 to Bruce and Darlene of Harrisburg, NC.  He attended Central Cabarrus High School and was employed by Bruce's Pool Construction/Aloha Pools.

He was a very loving and giving person who had a great sense of humor. He loved to play pranks with his many friends.  Brad was always ready for fun and lived life to the fullest.

He was an avid skate board enthusiast and also love dirt biking, skiing, snowboarding and spending time with his children, family and friends.

He will be sadly missed by his common law wife, Christina Witt, his 2 sons, Abel and Ayden, his step-daughters, Emma and Katelyn. He is also survived by his parents Darlene and Bruce Cogburn of Harrisburg, NC; his sisters Tracee or Harrisburg, NC and Autumn of Raleigh, NC; his brother Bruce of Charlotte, NC; his maternal grandfather Harold R. Hawk of Redding, CA; loving uncle Blake Witherspoon of Raleigh, NC; lifelong best friend Jack Rogers of Concord, NC; and a host of aunts, uncles, cousins and friends.

He is preceded in death by his paternal grandparents Victor and Maryanna Cogburn of Charlotte, NC and his maternal grandmother, Ethel Hawk of Las Vegas, NV.

To order memorial trees or send flowers to the family in memory of Victor Bradley Cogburn, please visit our flower store.
Send a Sympathy Card