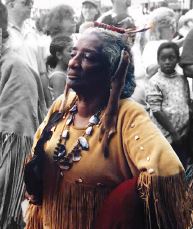 Zira Tomas, 97, passed to glory on August 10th, 2019. Cheerful, optimistic, curious and fun loving, she lived life with gusto, with an infectious laugh and never met a stranger.

She was a native of Brooklyn, New York born on March 2nd, 1922; she was the only child of her parents, William James Thomas and Harriet Baker, Rhustrumjii Hadahsa
Eugenia Zira Alhambra. She grew up in Salem, MA and resided in Staten Island most of her adult life. As a young child, during the Great Depression, she sang solo hymn at visiting churches. She was a long time member of the American Indian Community House New York City and received Honors from AICH Youth Council honoring our Elders 1995 and Gathering of Native American 1998. She was known for her love of music, theater, and dance. Zira enjoyed doing traditional Native dance well into her eighties. She returned to college late in life and finished her Bachelor’s degree. She spoke English, Portuguese, some French as well as her native Wampanoag language. She was an original foodie and loved chocolate. She loved to swim in the ocean and as a child with her father rode horses. She married the love of her life Julian Carey Lamar; from this union six children were born.

She is and will always be pure love in our hearts as she gave love to us.

To order memorial trees or send flowers to the family in memory of Zira Juanita Tomas, please visit our flower store.
Send a Sympathy Card